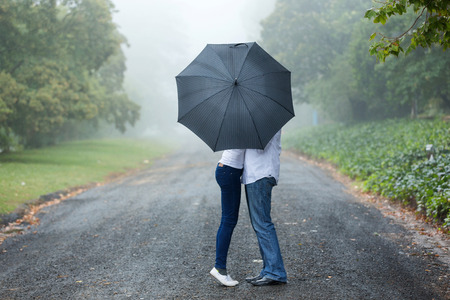 Case Study:
Meeting in the Middle

An I Ching Reading facilitated by Roger Sessions

His Question: How can I best support this marriage?

Her Question: How can I best support this marriage?

John and Mary had been married for several years. Both were and are creative individuals. Mary is a trained singer. John works more behind the scenes, providing technical support and enabling others to bring forth their work.

In the marriage dynamic, Mary is the alpha partner and John is the beta partner. She drives most of the marriage decisions and he focuses mainly on satisfying her needs.

The early years of their marriage were happy. Their common interest in the performing arts served as a bond.

Recently the marriage had become more tense. They were finding little time to be together. Their finances were becoming tighter. John worried about his job and was feeling stress about their ability to continue making monthly mortgage payments.

Their common interest in the performing arts that had once bound them together was now becoming a source of friction. Mary had started on a new course for her singing, one that involved training and making new contacts. John felt they were spending a lot of money on Mary’s new singing direction with little hope of payoff. Mary was frustrated that John was not supportive of her artistic call.

There seems a real possibility that the marriage could deteriorate.

I facilitated a Christian I Ching reading with Mary and John. They used an unusual format; both Mary and John asked the same question and coordinated their stone manipulation1 so that both received answers at the same time. Their common question was this: How can I best support this marriage?

John’s reading has starting Archetype 38, Opposition. He has one moving line in the fourth position resulting in Archetype number 41, Giving From Below. Mary’s reading has starting Archetype 42, Giving From Above. She has no moving lines, thus no resulting archetype. 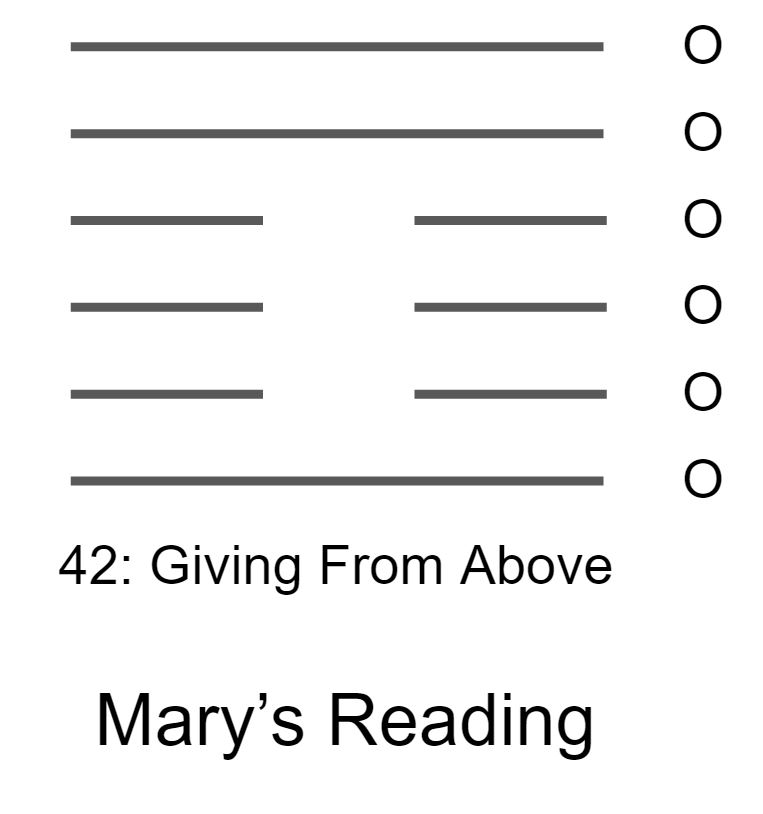 The most striking feature of this joint reading is where each of the partners ends up. Remember that Mary is the alpha partner. She dominates the relationship. She ends up at Giving From Above. John is the beta partner. He is subservient in the relationship. He ends up at Giving From Below. The marriage dynamics are obvious in the juxtaposition of the two readings, hers reaching down from above and his reaching up from below.

John doesn’t get to Giving From Below immediately. He must go through Opposition. Opposition brings this counsel, with my interpretations shown in square brackets:

This counsel tells John how to move forward in restoring the marriage.

The moving line in the fourth position encourages John that the marriage can indeed be restored:

A moving line in the fourth position suggests that although isolated, one may meet another [Mary] who is simpatico, a companion who can be trusted. These two wills can then unite and work together for a common vision.

John then moves to Giving From Below. In the context of the query, the name of the archetype is so clear that you almost don’t need to read the archetype. But if there is any doubt, its counsel includes the following:

Now is that time.

Mary goes directly to Giving From Above. Again. The name of the archetype is pregnant with meaning, but its counsel is still striking:

Now is that time.

Mary and John have taken the I Ching’s counsel to heart. Mary is more aware of John’s concerns. John is more willing to support Mary’s aspirations. They are meeting in the middle, and finding hope in that common place. Mary recently told me that she credits this reading with saving their marriage.

The logistics of this reading were interesting. Mary and John each had their own I Ching notebook, a query mat and a set of stones. Each line in the hexagram requires a sequence of three stone separations and countings. The first to complete a line sequence would wait until the other had completed his or her line sequence. They thus built up their hexagrams in parallel. This was their idea and it worked perfectly. I’ll be using this approach when I facilitate future couple readings.

(1) The Stone Protocol, used for receiving responses from the I Ching, is the recommended protocol of the Christian I Ching Society and is described in this article.

The quotations are taken from The Christian I Ching and reprinted with permission. This article is copyright (c) 2017 by Roger Sessions. All rights reserved.

Would you like to be notified when new articles are available from The Christian I Ching Society? You can subscribe [here] and unsubscribe at any time.

Roger Sessions is a Spiritual Director practicing in Austin, Texas. You can read more about him [here].